This was originally published on January 30, 2018

Replay (past): “Playing back the tape” never fails to set me straight.

Bachelorette parties. Man oh man. I’ve planned and/or attended many and it’s safe to say, there were no shortage of drunken shenanigans when it came to my participation. As my alcoholism progressed, so did my “hot mess” status at these shin-digs. In fact, I cannot believe I wasn’t at my own party almost 9 years ago. Wait, was I?

Okay, fine, I cannot remember every single detail. But I remember A LOT. Enough that I know I was never in a complete blackout….ehhhh, okay, I don’t remember much about the strippers and was completely oblivious to one of my bridesmaids going off on one of them. Nor do I recall passing out next to said bridesmaid at the end of the night. But I do have THE most flattering picture of above mentioned “slumber party.” So hot. 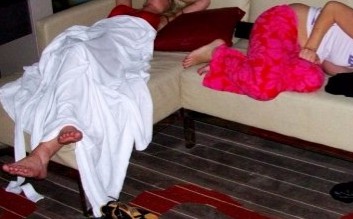 Annnyyyywayyyy, what I’m trying to say is that I was tame for my own bach. Tame compared to others. There are 2 in particular that I literally had to remove myself from because I was far too wasted and knew I had to get the F into bed before something bad happened. The last bach of my drinking days was the worst. So beyond…I can’t.

You guys, how was I not raped, murdered or arrested for DUI or vehicular manslaughter? 1 out of the 4 of those things just mentioned had already happened during my “drinking career” and the rest are my “yets.” That’s where drinking had taken me. I repeat: incomprehensible demoralization.

Welllllllllll…..it happened again. This past weekend was C2’s bach and I had to call it a night before everyone else. I had a burning pain sensation just under my rib cage that had started as we left the hotel room for dinner and a show. It kept coming and going, increasing with intensity.*  I was not myself and you could tell but I wasn’t going to let it stop me from seeing some comedy with everyone else and of course, I did not want to disappoint the bride. I was miserable and went right to bed after. It was then that I realized: wow, I left a bach AGAIN but this time I’m not hammered but rather in physical agony.

It’s like a replay of those past bach events, played by the same actor under a different director. And for what purpose? To remember what it was like and be grateful I never have to live like that again if I don’t want to.

Recovery. What a gift.

I am a "12 Stepper" who also practices harm reduction recovery in sunny southern California. I am a wife and mother who strives to help other women discover their relationship with alcohol and how they can live their best lives without it. View more posts